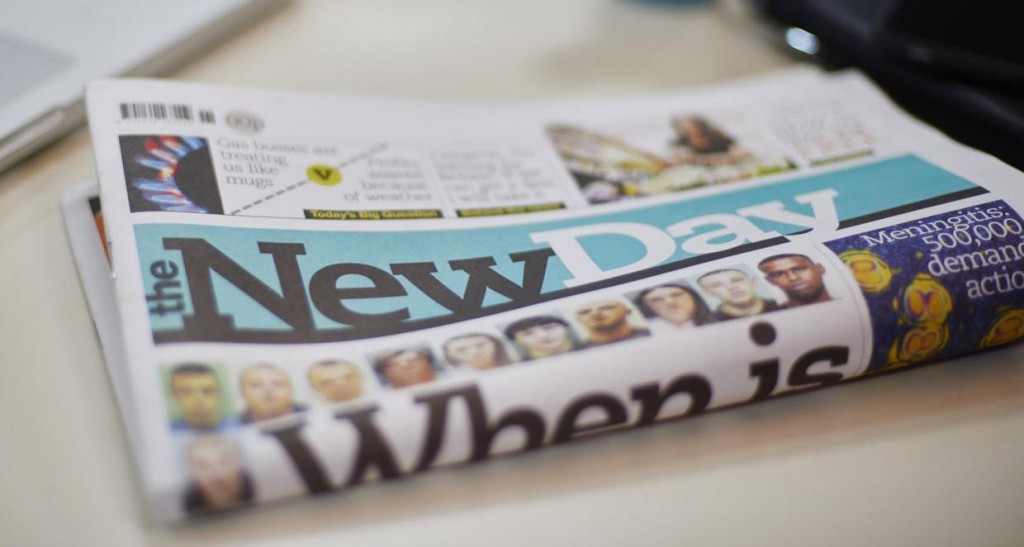 Speaking on BBC Radio 4’s Today programme a week before the launch of the New Day, the ‘first new newspaper for 30 years’, its Editor Alison Phillips commented:

“Whilst we have continued to put newspapers out in a fairly similar way for 100 years, there has been a massive nuclear bomb gone off in the media world with the advent of the internet, and we have created a newspaper which reflects that and understands that.”

I didn’t understand that. There has been a massive nuclear bomb gone off in the media world with the advent of the internet… so we’ve created a newspaper.

Not only this, but they created a newspaper that doesn’t have an online presence for its own content. None of the paper’s articles appear online, and its basic website simply says hello and directs people to its social channels, Facebook and Twitter, which are used to ‘spark conversation’ with short posts of text rather than directing readers to anything more fulfilling.

It’s hard to fathom how anybody thought this was a good idea in a digital age, when more and more people are consuming their news online and via their social media feeds.

And it’s a shame, because the small number who liked the paper seem to have really liked it. Just look at the comments under the Editor’s note published just a few hours ago at the time of writing.

So what can we learn from the end of the New Day?

Not having an online presence for its articles was always going to restrict how its content could spread, and therefore how many potential new readers could be reached – denying itself a key marketing opportunity right from the start.

Instead, too often the New Day found itself having to link back to content on the Daily Mirror via Twitter (NB – the New Day is owned by Trinity Mirror), rather than linking to its own, giving the impression that the New Day was just a minor Mirror spin-off, without any sense of real individuality.

It’s a shame, because the New Day’s format of posting a question based on breaking news was a nice way to start discussions on social media – the trouble is that this isn’t shareable, and that there was just no audience to read it because they made it too difficult for themselves to grow their audience online.

Compounding this was the fact that their mobile presence took too long. Following the first edition of the paper being published in February, it took the New Day until 29th April to tweet that its tablet edition was now available, restricting how easily people could realistically consume the paper. This was simply too late for a new media platform that was designed with the internet in mind.

Ironically, the New Day describes itself as ‘a newspaper that believes that life is short,’ and indeed, for the paper, it was. The New Day was an interesting experiment, but had all the hallmarks of media professionals wanting to hang on to the bygone era of the traditional newspaper rather than truly embrace the new dawn of social media and sharable content.

It’s a shame to see it go, but it won’t be much of a surprise to anyone.