Our Creative Director Henry Warrington shared his views on industry news and campaigns with Creative Moment. You can read his latest thoughts here…

The balance of ‘art’ and marketing is tough to get right, but Thom Yorke nails it again with an evocative dystopian teaser that hits all the right notes

This month, Radiohead published 18 hours of unreleased material for £18 following a blackmail attempt from hackers, masterfully turning what I can only imagine was gut-wrenching leak into a publicity opportunity to delight their fans. Now, Thom Yorke has deployed a wonderfully curious ‘teaser’ campaign for his latest solo album, proving once again that his creativity doesn’t end with music.

This isn’t the first time Radiohead/Yorke have deployed innovative publicity campaigns. In 2000, they “changed the way albums were marketed online” by creating ‘iBlips’ on fan sites for Kid A. In 2007, In Rainbows was released online with fans invited to pay whatever they liked for it. For Yorke’s second solo album, Tomorrow’s Modern Boxes, he made people actually pay for it using BitTorrent (a platform infamous for illegal downloads). In 2016, the band ‘disappeared from the internet’ just before the release of Burn the Witch.

And now, thanks to a mysterious company called ANIMA, enigmatic ads about forgotten dreams, and a creepy phone line, Thom Yorke has nailed it once again.

The Big Idea
Mysterious ads started to appear on the London Underground, and according to reports also in The Dallas Observer and Milanese phone booths. They carry the headline “Do you have trouble remembering your dreams” from a company called ANIMA. The ad’s copy explains that they have created something called a ‘Dream Camera’ and are inviting you to call or text a number to find out more and “get your dreams back.”

Intrigued, I did both. The text conversation was unnerving. The voice message was even more so, telling me that ANIMA Technologies has been “ordered by the authorities to cease and desist from undertaking its advertised business”. After a while, music begins to play.

And it didn’t end there. Projections appeared promoting ANIMA and the phone number on landmarks across London, including Marble Arch and The Tate Modern.

It’s only when you find ANIMA’s website that we get the ‘reveal’, and find that ANIMA is the name of Thome York’s latest album, with links to pre order. A short film is also coming Netflix. 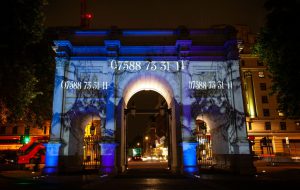 Review
Earlier this year, when Thom discussed this upcoming (and then unnamed) album, he said he was “influenced by dystopia, anxiety, and a crisis point in our social system.” This campaign makes you worry about the same thing. “Do you have trouble remembering your dreams?” “Goddamnend machinery.” “Who are these people?” But more than that, it’s a wonderful trail of breadcrumbs that leads us to a thrilling outcome for new and existing fans alike.

‘Teaser’ campaigns are often attempted, but rarely successful. Firstly, what is waiting to be discovered at the end of the trail needs to be worth finding. Second, there needs to be a clear trail to follow. Brands frequently expect too much of the audience, only giving them a single piece of the puzzle, assuming they’ll remember it when the next piece is released, and care enough put it all together.

But really, the brilliance of the campaign is how well it keeps the tone of Thom’s dystopian fears. Listening to the voice message and texting the number is paranoia inducing, yet thrilling. When art is involved, publicity can be very dangerous, turning the artist into a commodity motivated by sales rather than a greater cause, undermining their credibility in the process. But when done right, the publicly can be art. That’s what KLF were doing in 1994, declaring they wanted to ‘amend art history’, firstly taking a swipe at the Turner Prize by awarding double the prize money to the artist they decided was ‘the worst on this shortlist’. This was followed by arguably their most famous stunt: the burning of a million quid, which they said they wouldn’t talk about for 23 years and led to reams of press speculating at the reasons why (both at the time, and 23 years later in 2017).

For KLF, that kind of publicity was perfectly on brand (or, perhaps, ‘on band’?), something that, in their case, has been described as “anarchic situationist manifestations.” Radiohead/Yorke’s approach is different, but equally in keeping with their style, with themes of technology, isolation and dystopia, while maintaining the band’s almost-bashful subtlety and leaving it up to the audience to discover more. The beauty is that is doesn’t feel like marketing, it’s a continuation of the music, brought to life. This campaign for ANIMA made me feel like a paranoid android, and that was exactly the intention.