It’s hard not to smile at the sight of a soggy Nigel Farage; banana flavoured goo oozing down his lapels as his hand-cuffed assailant tells police: “I was quite looking forward to it [the milkshake], but I think it went on a better purpose.” But the line between cheeky satire and inciting violence is straw-thin, as Burger King just found out.

Milkshakes have become an unlikely protest symbol in recent weeks. Before Farage was doused in a Five Guys banana and salted caramel, a video of EDL founder Tommy Robinson getting ‘dunked’ by a McDonald’s milkshake went viral, and UKIP’s Carl Benjamin was hit with three of the thick beverages in as many days.

In response to this milky-movement, the McDonald’s branch in Edinburgh was asked not to sell milkshakes by police because of a Brexit Party rally close by. A photograph of the crudely designed sign informing customers of the shake-suspension, clearly printed out-the-back and attached via two blobs of Blu Tack, only added to the joke, and promptly went viral. Cue Burger King to step in… 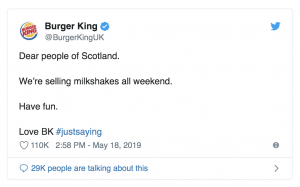 Possibly left shaken that McDonald’s had already gone viral as part of the dunking craze, BK came up with an opportunistic idea to capitalise on their clown-fronted rival’s ban. The burger chain posted a tweet: “Dear people of Scotland. We’re selling milkshakes all weekend. Have fun. Love BK #justsaying.” To date, it’s had more than 20K retweets. Most of the 8.9K comments are negative, accusing the brand of promoting violence, but the substantial 110,000 likes suggests the public reaction may be more complicated than that.

What’s followed is an avalanche of negative press about Burger King, prompting it to row back on its original position. “We’d never endorse violence – or wasting our delicious milkshakes! So enjoy the weekend and please drink responsibly people,” read the post issued a few hours after the original, in an attempt to diffuse the issue while maintaining the ever-cheeky tone of voice.

Pushing back on racism has to be applauded when done right (see Nike’s Kaepernick ad), but that’s not what we have here. This was a hastily written tweet designed to score a quick win over a rival fast-food outlet, in the backdrop of a nation dived over Brexit and concerns over a resurgent far right movement.

Media commentators’ views are mixed; most say that throwing a milkshake isn’t that different to throwing a punch, while others say that any protest against fascism is both fair game and welcome. For my part (and regardless of the individuals involved), I know how I’d feel if someone threw a milkshake over my mother, and the police responded by saying it wasn’t an act violence, and was actually quite funny. That, unlike the milkshakes, wouldn’t fly.

But this post isn’t about the morality of the attacks; it’s about what we can learn from Burger King getting into this mess, and it’s easy to see how it happened. Hijacks have to land quickly to be effective, meaning the regular stringent sign-off processes can get bypassed, especially when they break at the weekend, as this one did. Someone saw an opportunity and went for it, without greater thought of what they were advocating.

And it was very, very easy to get lured into the comedy of it all. I’ll admit it, I’m a hypocrite. I smiled at Farage and company covered in the banana/strawberry gloop. But acts of violence, no matter how funny, should not be encouraged by a highly influential brand with almost 18,000 stores in 100 countries. Burger King has to take responsibility and needs a better process for this kind of reactive opportunity, especially when it has no obvious higher motive than selling more shakes. As poorly thought-out tweets go, this was a Whopper (#justsaying).

Burger King needs to do two things here. Firstly, improve upon its social media processes – map out potential opportunities, outlining where they will (and won’t) step in, and ensure that everyone understands the route from idea to sign-off that allows for both speed and consideration. Second, BK should think about whether this is a debate they want to be part of, and if so, do something more meaningful than opportunistic point-scoring against McDonald’s.

By Partner and Creative Director @HenryWarrington, as featured in Creative Moment